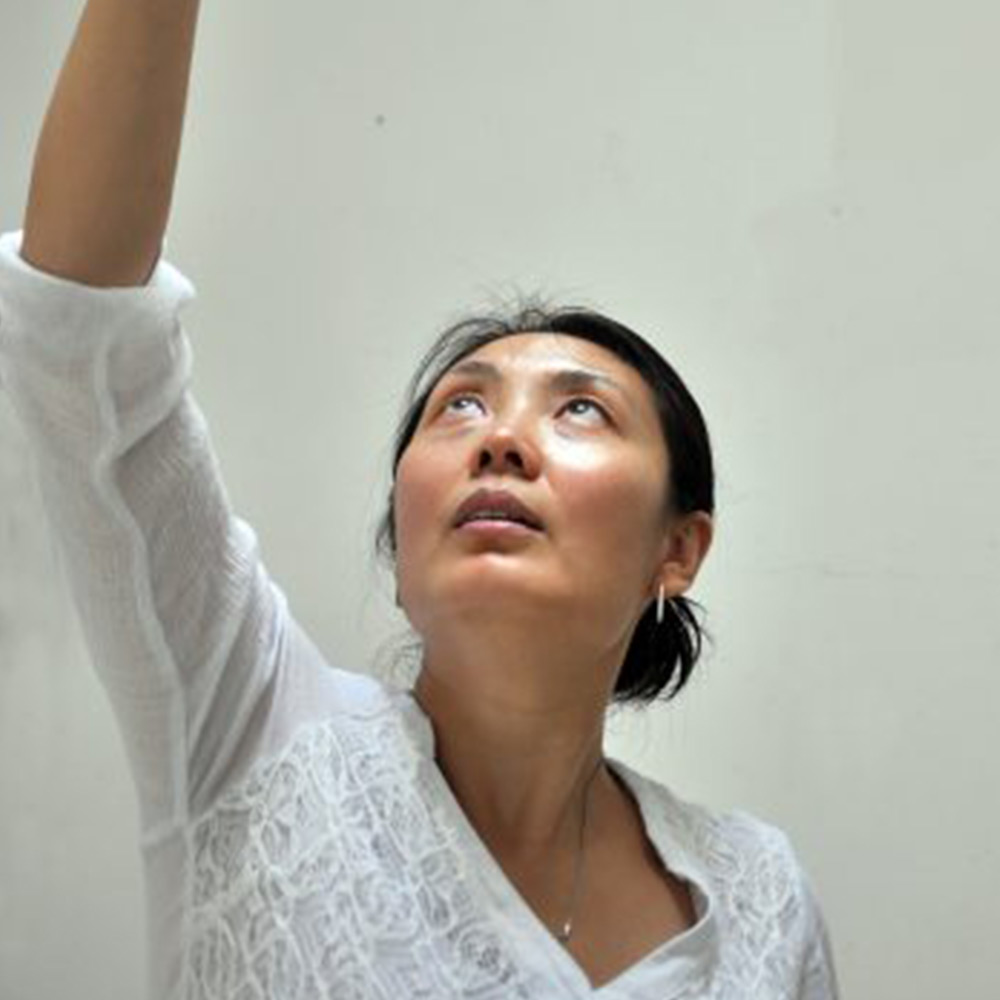 Xia Gao received her B.A. and M.S in Fashion Design from Donghua University (former China Textile University) and her MFA in Textile Design and Art from the University of Wisconsin-Madison. Gao is a visual artist and designer who primarily works with fibers/textiles for 2D, 3D and installation expressions. Her works often address personal, cultural, and societal adaptation and transformation.

Currently, Gao is an Associate Professor in the Department of Art and Art History at Michigan State University. Before joining MSU, she was faculty member of the University of Nebraska-Lincoln and Donghua University in Shanghai, China. Gao has also guest lectured and presented at diverse academic and conference venues.

She has exhibited widely in numerous juried group shows and solo exhibitions nationally and internationally. Her works have been included in the influential Fibers/Textile Art venues, like “Everyone to the Table-Miniartextil 2015” at Arte&Arte in Como, Italy; “Love Lace” international competition and exhibition at Powerhouse Museum in Sydney, Australia; “Triennal OFF” –7th International Triennial of Contemporary Textile Arts of Tournai, at Arrêt 59 in Belgium; “6th World Textile Art Biennial-Air” at Anahuacalli Museum in Mexico City and The institute of Fine Arts in Xalapa, MEXICO; “From Lausanne to Beijing” – the 6th International Fiber Art Biennale Exhibition at Henan Art Museum in Zhengzhou, China, and many other national mixed-media art venues, such as Urban Institute for Contemporary Arts in Grand Rapids, Visual Art Center at the University of Texas-Austin, and N’Namdi Center for Contemporary Art in Detroit. She is the recipient of several nationally/internationally juried exhibition awards. Her artwork is included in the book “Exploring Fiber Art” and periodicals as well including Fiber Art Now, Surface Design Journal, and Textile Forum.

Gao’s work has been supported by competitive fellowships and awards from foundations and universities including the Prizker Foundation, Vermont Studio Center, ARNA Artist Residency (Sweden), Virginia Center for the Creative Arts, the University of Wisconsin-Madision, the University of Nebrasca-Lincon, and Michign State University.

I love observing people’s lives, especially those different from my own. I think it is both the geographic distance and cultural difference that elevate my curiosity. When I relocated into a Western culture, the geographic migration brought me new insight into the cultural milieu of my native East. My work tells stories, personal experiences, and my renewed connection to my cultural tradition and Eastern origin. The transformations in my own life and in Chinese culture are new inspirations for my creative expression.

The dialogues between past and present, East and West, nature and culture are recurring themes in my work. The boundaries between these themes might be clear or blurred as they appear in the real world. My memories, reflections, and contemplations are interpreted into visual languages of image, layering, light, and shadow, and material then applied in space.

I attend to the interplay of textile with space and invite audiences to participate in their interaction. Surface images are often loaded with cultural interpretations. They allude to tradition yet dissolve into modernist aesthetic expression. Layering not only refers to the explicit overlapping of material and imagery, but also implies a juxtaposition of times, cultures, and aesthetics.

An evolving hybrid-making process, which blends digital and manual skills and integrates traditional techniques with new innovations, comes naturally to my work; it fits into my transcultural perspective and position.

Art Professor to Have Work Showcased Around the World 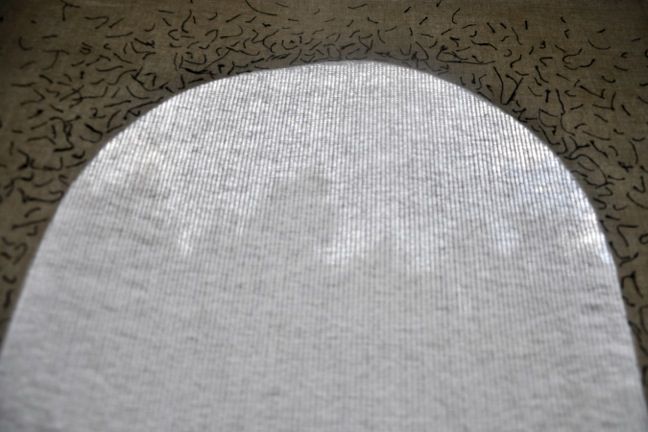 To Own Buddha (Detail) 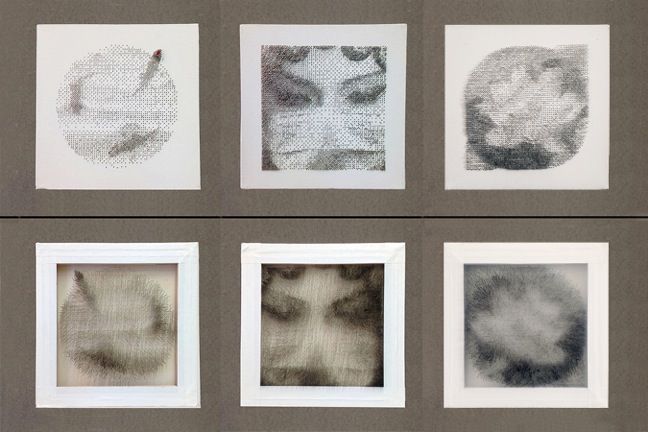 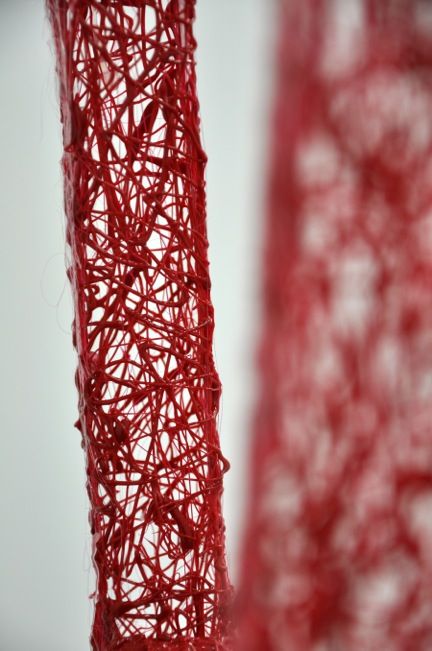 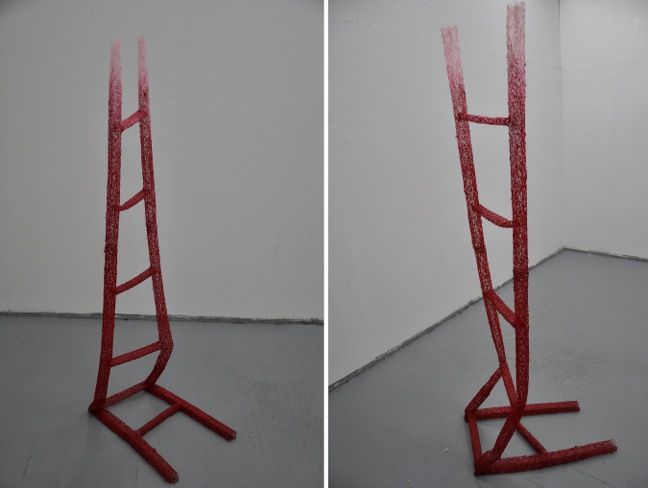