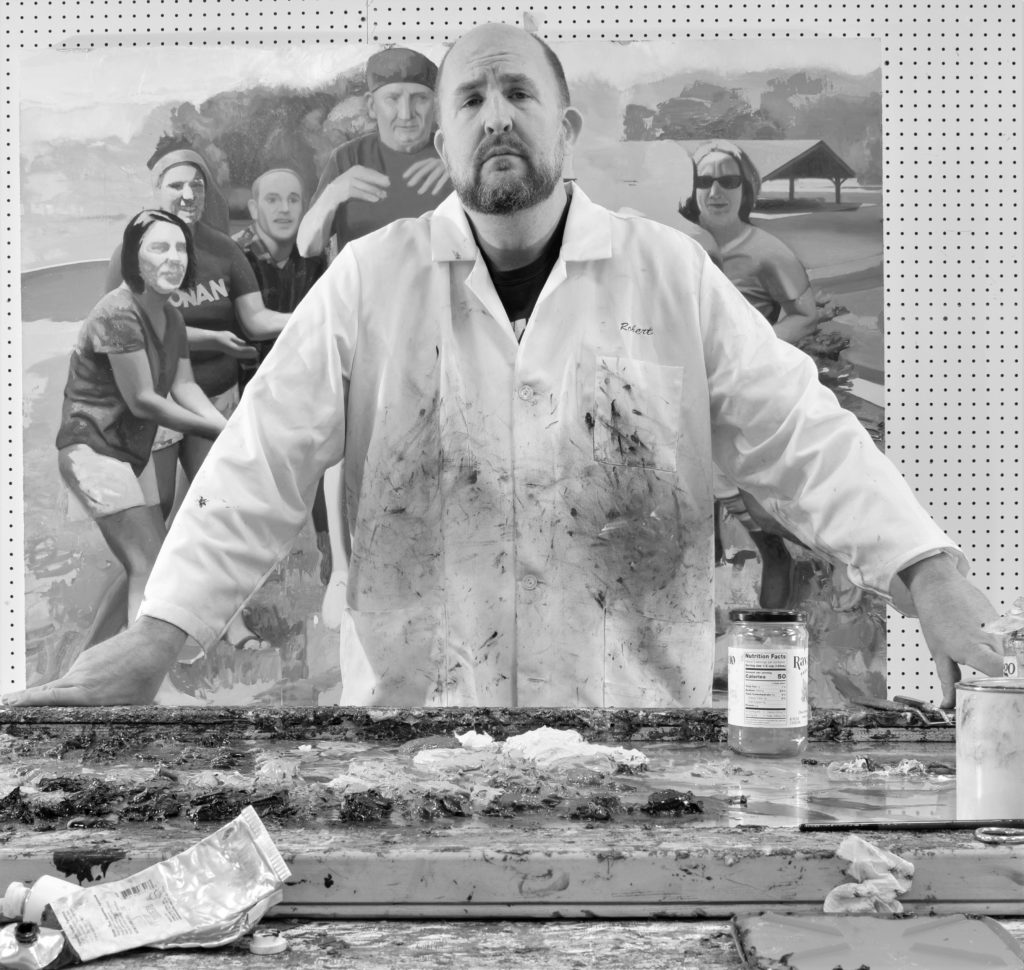 Robert A. McCann is a Midwest-based artist and educator. Born and raised in the Ozarks of southwest Missouri, he developed his studio practice through studies at Missouri State University, Indiana University, and as a Fulbright scholar based in Berlin, Germany.

McCann’s paintings have frequently dealt with the potential for metaphors in our byzantine mass media culture, and the overwriting of epic and intimate events in the particular artifice of painting.  He has exhibited his artwork extensively around the United States, including solo exhibitions at prominent public venues such as Grand Rapids Art Museum, South Bend Museum of Art, the University of Kansas Art & Design Gallery, and the University of Arkansas Galleries at Little Rock.  Recent group exhibitions and events include ARTMIX at Boulder Museum of Contemporary Art, The Gig Economy at Boston Center of the Arts, and Sense of Place at the Elmhurst Art Museum.  He has been a member of the artist-run nonprofit Amos Eno Gallery in Brooklyn, New York, since 2015.

My paintings are concerned with big themes like desire and loss, history and progress, entertainment, existence, and entropy.  I don’t begin paintings from a singular premise.  I will have several ideas and feelings I want to express, consciously and otherwise.  Some arrive on the front end, while other meaningful elements are found through the discursive process of layering figures, spaces, colors, marks, and materials.  I think of painting as fundamentally fictional and physical.  The construction of the image is activated by that winding together of hand and mind.

I develop visual ideas initially from combination of different sources that range from YouTube video clips to personal photography to drawing invention.  I have a stack of notes with titles like “vacuuming with chairs on the table” and “Beverly Hillbillies colonizing Mars”.  I have folders with photos I’ve shot and imagery I’ve gathered, and I cut up, modify, and collage those things together to begin world-building before bringing it to the canvas.  Then in painting there is a back and forth between the picture and the abstraction of it.   I look for an outcome that is believable in some visceral way, while reading as an unreal, metaphorical situation.

I often populate the work with pop culture figures of major and minor fame.  It will usually have a resonant connection for me, a point of personal mythology that stands in for some experience or memory.  It also serves as a shorthand for the portrayal of a particular kind of character that the viewer may recognize.  And I feel the internet and social media have flattened some of the barrier between celebrities and acquaintances, or between personal space and the news.  That off-kilter feeling of the public and private being drunk from the same firehose has been a theme in recent work. Unseen Hands of the Free Market 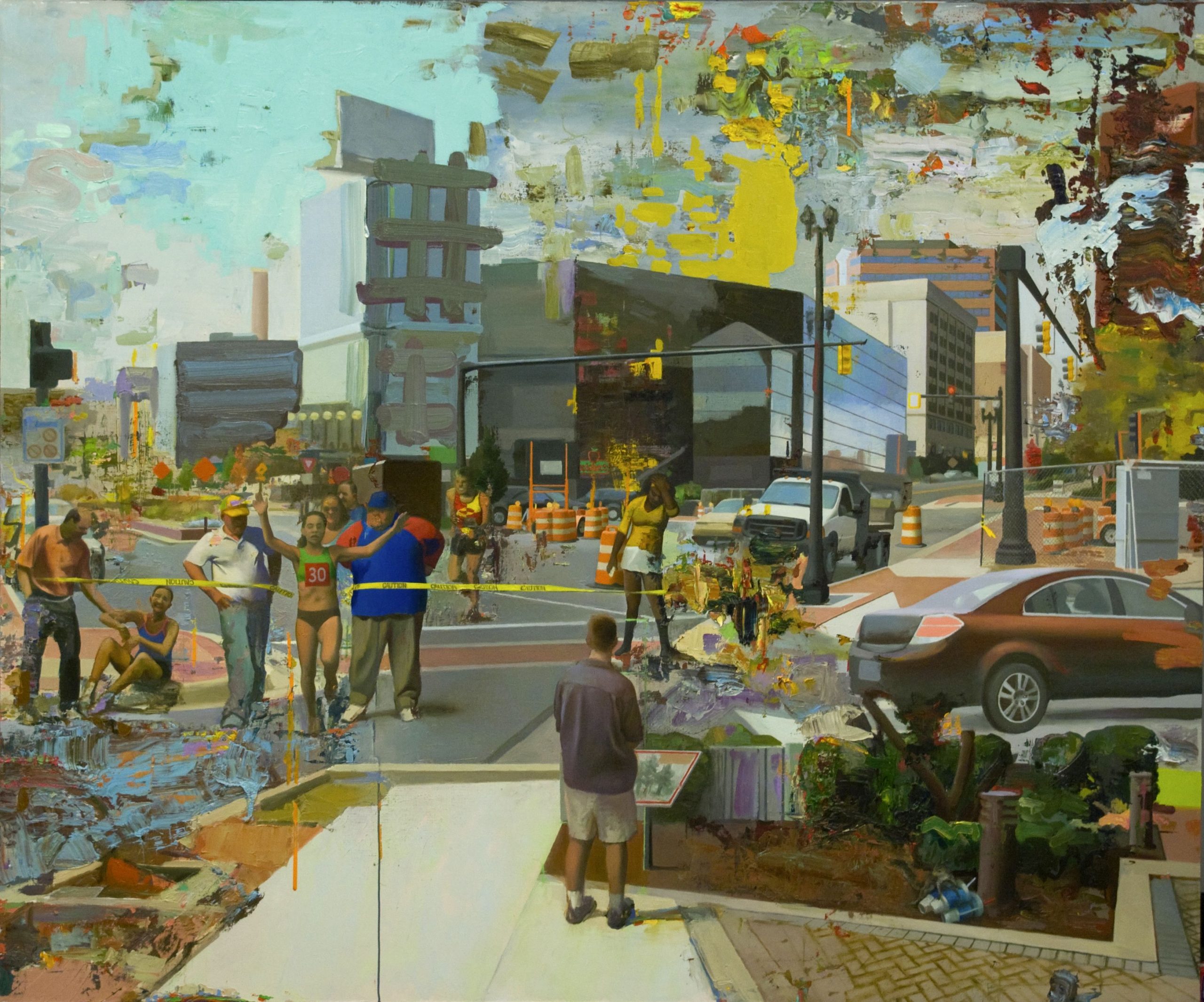 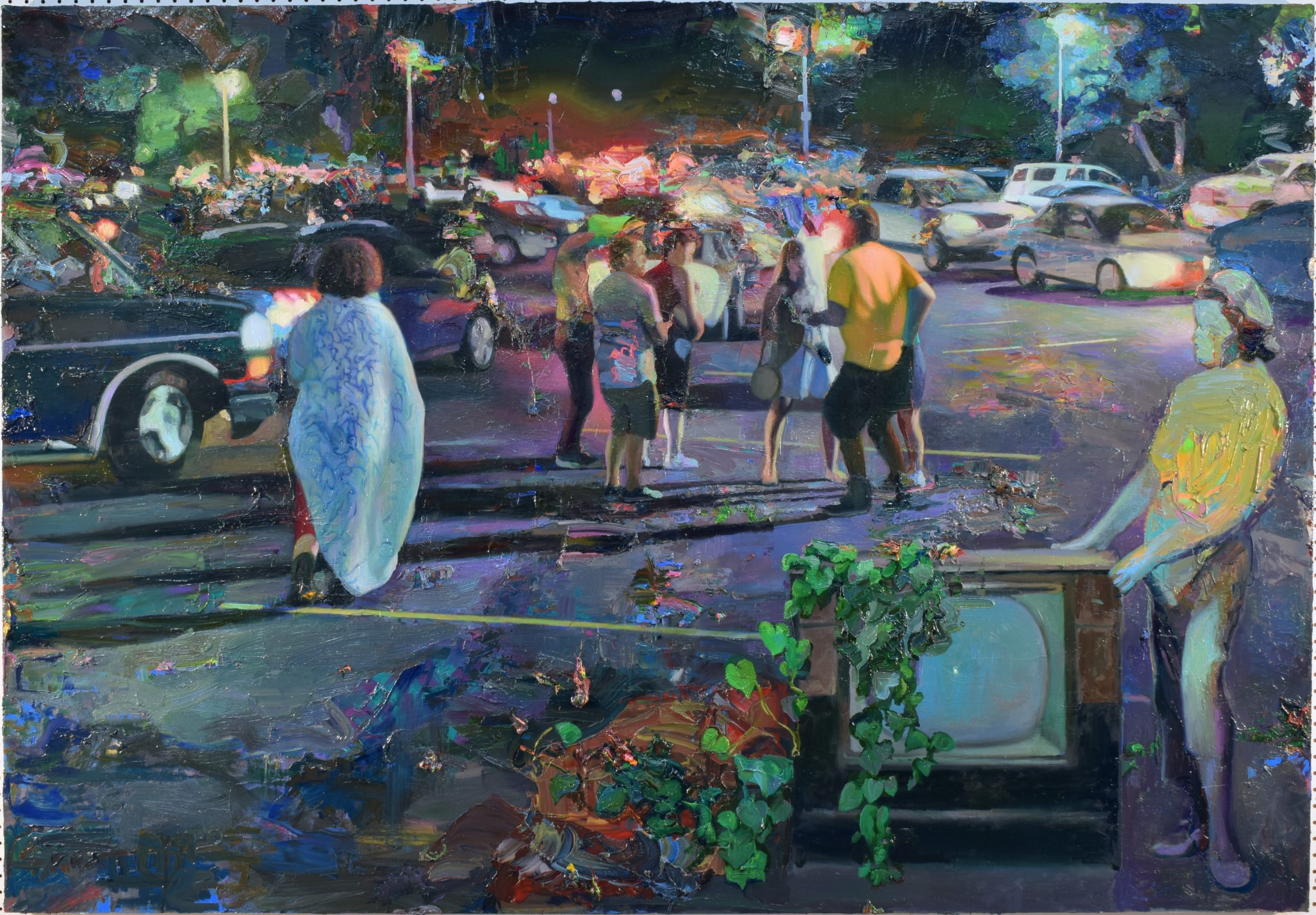 Not to Fall Apart Raft of Calculus, Calculus Being the Study of Continuous Change