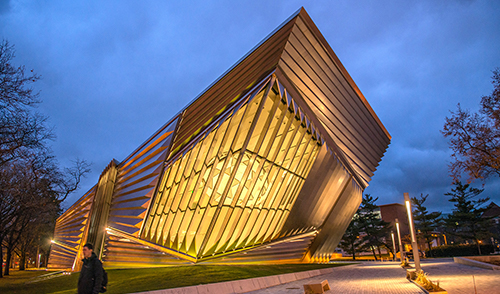 ALL LECTURES ARE FREE AND OPEN TO THE PUBLIC. START TIME IS AT 7PM UNLESS OTHERWISE NOTED…

Events are sponsored by the Department of Art, Art History, and Design along with the generous support of others at MSU, including: College of Arts & Letters, Creating Inclusive Excellence Funding Program from the Office for Inclusion & Intercultural Initiatives, Office of the Provost, Eli and Edythe Broad Art Museum MSU, and Asian Studies. Additional sponsors include: Luther and Louise Roehm Endowment, Marlio Endowment, AIGA Detroit, and MSU Federal Credit Union.

Known for his on-site painting technique, the work of painter Liu Xiaodong captures the rapidly changing Chinese landscape. His work has been exhibited internationally and was included in the 47th Venice Biennale. Liu is represented by the Mary Boone Gallery and teaches at the Central Academy of Fine Arts in Beijing, China.

Michigan artist, Lisa Walcott is the first artist in the Broad MSU’s new Artist Studio Series, made possible by the MSU Federal Credit Union. Walcott is a kinetic sculptor and installation artist, who uses simple mechanics and motors to activate objects in space. She will present her work and ideas in conversation with Director of Education, Aimee Shapiro.

The drawings, paintings, and installations of Mark Dean Veca portray surreal cartoons, psychedelic landscapes, and pop culture iconography within the framework of historically decorative motifs. He has been honored with fellowships from Pollock-Krasner, NEA, and MacDowell Colony. Veca’s visit to MSU is aligned with his Artprize installation at SiTE:LAB in Grand Rapids.

The site-specific work of Michigan-born sculptor Jason Middlebrook challenges traditional expectations for boundaries between civilization, culture, and nature. Middlebrook is a 2010 recipient of a Joan Mitchell Fellowship and in 2013 he will be featured in a solo exhibition at MASS MoCA.

With more than a decade of experience in the fashion and costume design industry, Donald Bradford serves as GlobalDenim Designer for Calvin Klein. Bradford’s design experience also includes knitwear and construction for Macy’s. Inassociation with his lecture, Bradford will offer an innovative design process workshop on October 23.

Since 1999, the Minneapolis-based commercial art and printmaking studio of Dan Ibarra and Michael Byzewski hasoccupied the unruly space between design, entrepreneurship, and art. Aesthetic Apparatus’ clientele list includes Ray-Ban, Absolut Vodka, and Target and their work has been featured in publications from Rolling Stone to HOW Magazine.

The site-specific work of Steve Lambert aims to foster awareness of the institutions and technologies that structure our daily lives. His work exploring advertising and public spaces has been exhibited everywhere from museums to protest marches and was included in the 2009 Whitney Biennial. Currently, Lambert teaches New Media at SUNY Purchase.

Operating under the name Larson+Shindelman, these collaborative artists produce work that considers the cultural understanding of distance as perceived in modern life and network culture. Their projects have been featured in Wired Magazine, Hyperallergic, and the New York Times. Larson teaches at MICA and Shindelman at University of Georgia.

Evelina Domnitch and Dmitry Gelfand collaborate to create sensory immersion environments that merge physics, chemistry, and computer science. Their installations exist as ever-transforming phenomena offered for observation. They are recipients of the Japan Media Arts Excellence Prize and have been awarded three Ars Electronica awards.

Painter and theorist Jeremy Gilbert-Rolfe challenges contemporary interpretations and critiques of beauty, materiality, and the role of painting in a post-Modern context. Authoring several texts, including Beauty and the Contemporary
Sublime, Gilbert-Rolfe has been honored for his contributions to painting and criticism with fellowships from the Guggenheim, NEA, and College Art Association.

Ceramicists Daniel Bare and Valerie Zimany collaborate on a regular basis, creating large-scale installations that address issues related to societal and cultural trends of excess with a particular interest in materials seen as non-durable, ephemeral, or short-lived. Zimany and Bare teach at Clemson University.

Award-winning comic book artist Stan Sakai is most known for his long-running anthropomorphic series, Usagi
Yojimbo, which has been published in 12 languages. Sakai’s work has garnered numerous Eisner Awards and in 2011 theJapanese American National Museum in LA presented a retrospective of his 30-year comic career.

As Creative Director of Environments at the Philadelphia-based multi-disciplinary studio Bluecadet, Brad Baer works alongside a team of storytellers including designers, developers, illustrators, and photographers. He specializes in the creation of narrative-based experience ranging from multi-device websites to interactive and immersive environments.

The studio practice of Michael Rakowitz is rooted in social concerns and often takes form as architecture, performance, and participatory, community-based events. His work has been included in notable exhibitions and venues ranging from Documenta 13 to the Tate Gallery. Rakowitz is currently a faculty member at Northwestern University and is represented by Lombard-Freid Projects.

The research interests of art historian, critic, and Tufts University faculty member Nuit Banai focus on the post-war and contemporary construction of new publics through the visual arts. Her writing has appeared in catalogues for the Pompidou,Musee d’Art Moderne, Bronx Museum of the Arts, and Documenta.

The paintings of David Humphrey employ surreal and kitsch imagery in a humorous and sometimes biting narrative of middle-class malaise. Beyond the studio, he is a Senior Critic at Yale School of Art and an anthology of his art writing, Blind Handshake, was published by Periscope Publishing in 2010. Humphrey is the recipient of a Guggenheim Fellowship and the Rome Prize among other awards.

New Delhi-based artist Mithu Sen is a recipient of India’s prestigious Skoda Prize for contemporary art. Her work engages with the erotics, or the fetish, of things and her repertoire of images is concerned with the relationship between the conscious and unconscious aspects of the self. Sen’s lecture coincides with a solo exhibition at the Broad Art Museum MSUin April 2014.