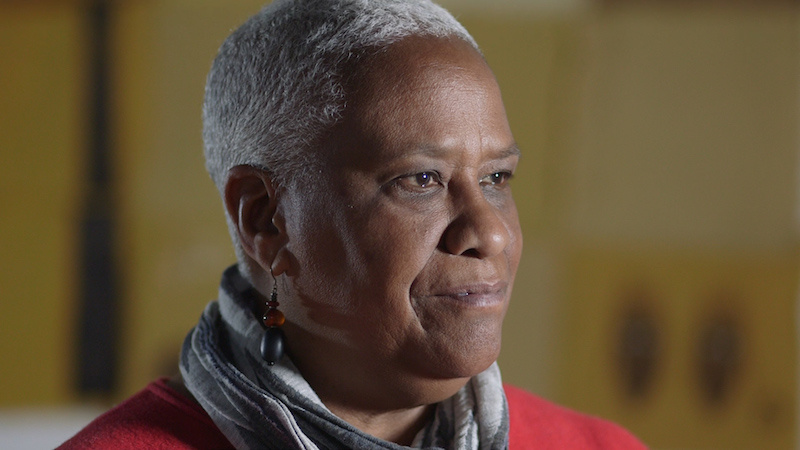 Karen Hampton, Assistant Professor in the Department of Art, Art History, and Design, has been selected to receive this year’s King-Chavez-Parks Visiting Professors Program award.

Launched in 2017, Hampton was chosen as one of the program’s inaugural artists-in-residence. As part of her residency, she mounted a solo exhibition of her work at the MSU Union Art Gallery and participated in outreach to the community. She also taught two courses in the Studio Art and Apparel and Textile Design programs and lectured and gave workshops to classes in the College of Arts & Letters.

“I want my students to start figuring out what the things are that activate them – being creative, getting out, getting your hands dirty and playing, and letting that flow from your subconscious to your conscience, that is incredibly stimulating. That’s where creative problem solving comes from. That’s how you build leaders,” Hampton said.

A textile artist, Hampton’s work is steeped in oral history and based upon ethnographic research techniques. Through her work, she seeks to break stereotypes and addresses issues of colorism and race by responding to the under-representation of black and brown histories in the American historical record. She views herself as a vehicle by which ancestral voices can transcend history and remain as historical memory.

“Every time my needle pricks the fabric, I’m laying a little bit of intent to address the issues of race in society,” Hampton said.

Every time my needle pricks the fabric, I’m laying a little bit of intent to address the issues of race in society.

The canvas of her work is coarsely woven cloth that is aged and imbued with conceptualized images and text from a forgotten part of the American story. Viewing her artwork as a form of resistance, Hampton tells quieter American stories usually buried in the everyday experiences of family life.

During her residency, Hampton spent three months traveling back and forth to Flint, Michigan, to try to understand the city’s water crisis and the emotional effect it was having on residents. Besides residents, Hampton also spoke with historians, researchers and curators.

“What I found was in order to understand Flint, I had to understand the history of the auto industry, the UAW, Detroit, Lansing, and Grand Rapids,” Hampton said. “What I learned that stood out the most to me was the art in Flint. Flint probably has more art per square foot than any other city in Michigan, held in the collections of the Mott-Warsh Gallery and the Flint Institute of Arts. Everything about Flint surprised me. I found that I just had to be quiet and let the story come.”

What came from this experience is a piece Hampton created, titled Prayers for Flint.

“Prayers for Flint is my story and expression of thanks I feel towards the Michigan people who shared their lives and stories with me,” Hampton said. “These are good people who have worked hard, taken care of their families, and believed in the ‘working class dream.’ They have gotten a bum deal. Massive layoffs and now they have to cope with the polluted water of the Flint River and the poison housed within the pipes. I felt that what I could give them were my prayers.”

For Prayers for Flint, Hampton dyed the fabric the colors of the polluted water in Flint, and a mask that is repeated in the corners of the fabric is an initiation mask that she saw on display at the Flint Institute of Arts.

“I use past and present symbols to tell a story that reflects on heritage and remembers the past,” Hampton said. “The mask is there as a reminder of African heritage and to hold the dreams for a better Flint. The bottle tree in the center of the work is symbolic of the bottle trees found in the American South, primarily on African American homesteads, for protection, and the heart-shaped symbol is a representation of ‘Sankofa,’ which comes from the Yoruba culture of West Africa and means to remember your past so you do not have to repeat it.”

I want my students to start figuring out what the things are that activate them…and letting that flow from your subconscious to your conscience, that is incredibly stimulating. That’s where creative problem solving comes from. That’s how you build leaders.

Part of the Department of Art, Art History, and Design, the Critical Race Studies Artist Residency aims to enrich the life of the greater Lansing community by facilitating practices of inclusion through art and design. It empowers artistic creativity that drives cultural transformation through a shared engagement with creative practice.

The program also introduces students to different perspectives around racialized subjects while giving them access to artists who are working and thinking about race who can help break it down in ways that are constructive.

The Martin Luther King Jr., Cesar Chavez, Rosa Parks Visiting Professors Program was created by the Michigan State Legislature in 1986 as part of the larger King-Chavez-Parks Initiative. The legislative intent of this initiative was to stem the downward spiral of college graduation rates for economically or academically disadvantaged students in postsecondary education. In support of this mission, the legislature created the King-Chavez-Parks Visiting Professors Program to increase the number of underrepresented instructors in the classroom to provide role models for economically or academically disadvantaged students. Funds for this program are provided by the State of Michigan Talent Investment Agency.