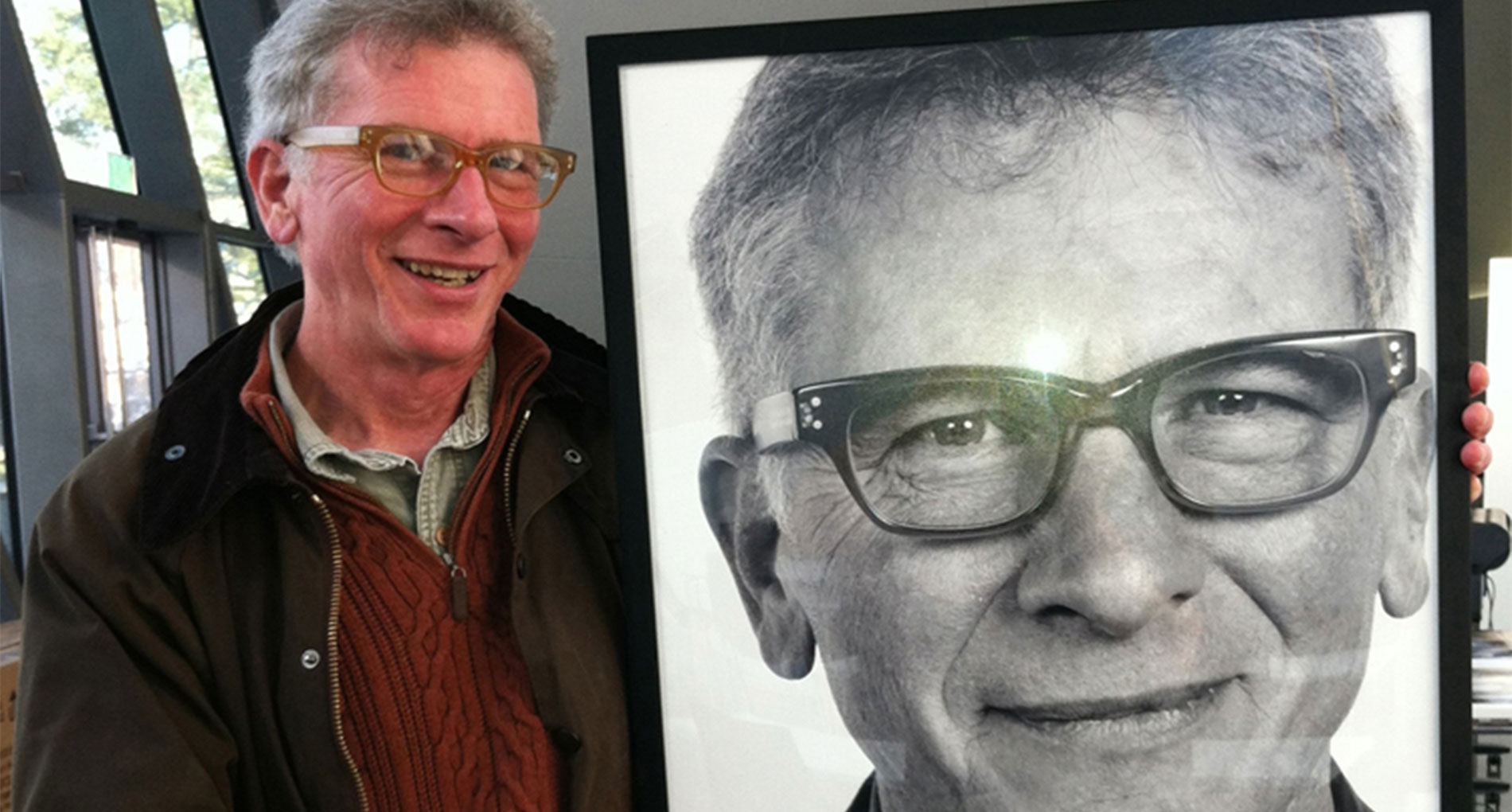 Twenty years after he first traveled to South Africa, Peter Glendinning, Professor in the Department of Art, Art History, and Design, has returned as a Fulbright Scholar to teach at Tshwane University of Technology in Pretoria and Nelson Mandela University in Port Elizabeth, and create a body of artwork inspired by the words of Nelson Mandela.

This year marks 25 years since Mandela took office as South Africa’s first democratically elected president and 25 years since the end of apartheid. Mandela began his presidency at the end of the apartheid era by addressing the significance of each individual citizen and their unity with each other in relation to the land, stating during In his inaugural address on May 10, 1994: “To my compatriots, I have no hesitation in saying that each one of us is as intimately attached to the soil of this beautiful country as are the famous jacaranda trees of Pretoria and the mismosa trees of the bushveld. Each time one of us touches the soil of this land, we feel a sense of personal renewal. The national mood changes as the seasons change.”

These words of hope, unity, and reconciliation are the lens through which Glendinning’s creative multimedia project, titled “Attached to the Soil: Portraits of South Africans in the 25th Anniversary Year of Freedom,” is formed.

It’s essential for me to have portraits made in each of the nine provinces because I’m committed to creating a project that represents the broadest cross section of people of South Africa.

Glendinning, who first traveled to South Africa in 1999 to do a series of portraits of South Africans at work, this time is visiting all nine provinces of the country to collaborate with university students at a number of institutions who propose their own contemporary interpretation of Mandela’s words. With them, Glendinning will create portraits, gather oral histories, and make landscape video segments to form a multimedia portrayal of the South Africans whom the students feel represent their concept of being “attached to the soil.”

“It’s essential for me to have portraits made in each of the nine provinces because I’m committed to creating a project that represents the broadest cross section of people of South Africa,” said Glendinning, who left for South Africa at the beginning of January and will be there through July. “In the end, what I’m hoping for is to create truly revealing portrayals, through the unique stories of the people I’m photographing, in a context that others can relate to.”

The portraits will be shot on location at a place where each subject feels attached to the soil. Glendinning is expecting there to be a wide variety of locations, tempered by what the students and subjects define for themselves.

“My goal is to honor these people who not only have unique stories to tell about their own attachment to the soil of South Africa, but also as an average person who represents so many other people like them,” Glendinning said. “I want the students to really be a defining factor in the project because it’s their country; it’s not mine. I hope they will look at this as an opportunity to really discover, or rediscover, the hopeful tone that Nelson Mandela conveyed in his inaugural address. This project is a way for them to understand their country, their own aspirations, and also Nelson Mandela’s hopes for it as well.”

The photos will be shot digitally and then printed by Glendinning when he returns to the United States using a traditional darkroom process to create them by coating archival paper with platinum emulsion.

“South Africa is the source of 80 percent of the platinum in the world, so the prints themselves will have been attached to the soil,” Glendinning said. “Platinum also is very precious and is representative of the vast riches of the country and the vast differences between the living conditions of people in different places.”

Another reason Glendinning is making platinum prints is because they are probably the most archival process you can use today.

It’s important to me that in 2044, the 50th anniversary year, and even 250 years from now, the pictures be available.

“It will last literally as long as the paper they are printed on,” he said. “It’s important to me that in 2044, the 50th anniversary year, and even 250 years from now, the pictures be available as a means by which people may reflect on the meaning of being attached to the soil, and of being a South African, both in the context of this 25th anniversary year and in the future.”

Other aspects of platinum printing that make it appropriate for this process is that its tones are only in black, white, and shades of gray, and it has the longest tonal range of any printing process.

“There are more variations of grays than any other printing process I know of,” Glendinning said. “Since the country’s conflicted history has much to do with white and black and shades of gray, the absence of color is symbolically very important. I think that one of the things Nelson Mandela hoped for was that color would be missing; that it would not be about color, but that it would be about who you are.”

In addition to the photos, Glendinning and the students will be recording oral histories from their subjects, asking them to reflect upon Nelson Mandela’s inaugural address, how they personally feel attached to the soil of South Africa, and what they feel Mandela meant by that.

Glendinning will be making videos of the landscapes that will be combined with the oral histories.

“It is really an opportunity for the people I will be photographing to reflect upon an autobiographical role, and their role in the larger context of South Africa,” Glendinning said. “Putting the oral histories together with the portraits and video segments of the landscapes, which they find special, is where the full meaning of the project will arise.”

Glendinning plans to donate a set of the platinum prints and video segments to the South African National Gallery in Cape Town. Also, both Tshwane University of Technology and Nelson Mandela University plan to host an exhibit of the project when it is completed. A book and other exhibitions will follow, and the entire archive will be placed online as well.

It is essential to me that the project is shared online so that everyone in South Africa who is interested…can access it in order to gain some sense of perspective about their own lives and their country.

“It is essential to me that the project is shared online so that everyone in South Africa who is interested, from schoolchildren through older folks, can access it in order to gain some sense of perspective about their own lives and their country,” Glendinning said.

“My hope as an artist is that it will be seen not simply as a success in the formation of multi-dimensional portraits. I hope that by its creative response to the intimate connections of citizens to its soil, and thus to each other, it may contribute to the process of mutual attachment envisioned by President Mandela.”

In addition to the “Attached to the Soil” project, while Glendinning is in South Africa he will be doing lectures on portrait photography and will be working with graduate students and giving them feedback on their projects. He also will give lectures sponsored by the U.S. Embassy and Consulates at “American Centers” across the country as part of his public diplomacy efforts.

“As a Fulbright Scholar, sponsored by a program of the U.S. State Department, I have the privilege of representing not only Michigan State University but the United States of America, and I take that role seriously,” Glendinning said. “With this being the Year of Africa at MSU, celebrating our long-standing connections to that continent, I know that my efforts have been made possible in part by colleagues who came before me and who have worked so hard to make the African Studies Center such a vital and important part of the MSU mission.”

Glendinning also will be exhibiting photographs from his award-winning “My Paris” series at gallery venues across South Africa. That series offers a different way to think about portraiture in that the images do not show people but rather their environments. Made with Polaroid SX-70 film at night in a dark apartment in Paris, illuminated only by a flashlight, the series was named one of the best of 2015 by the American Society of Media Photographers.