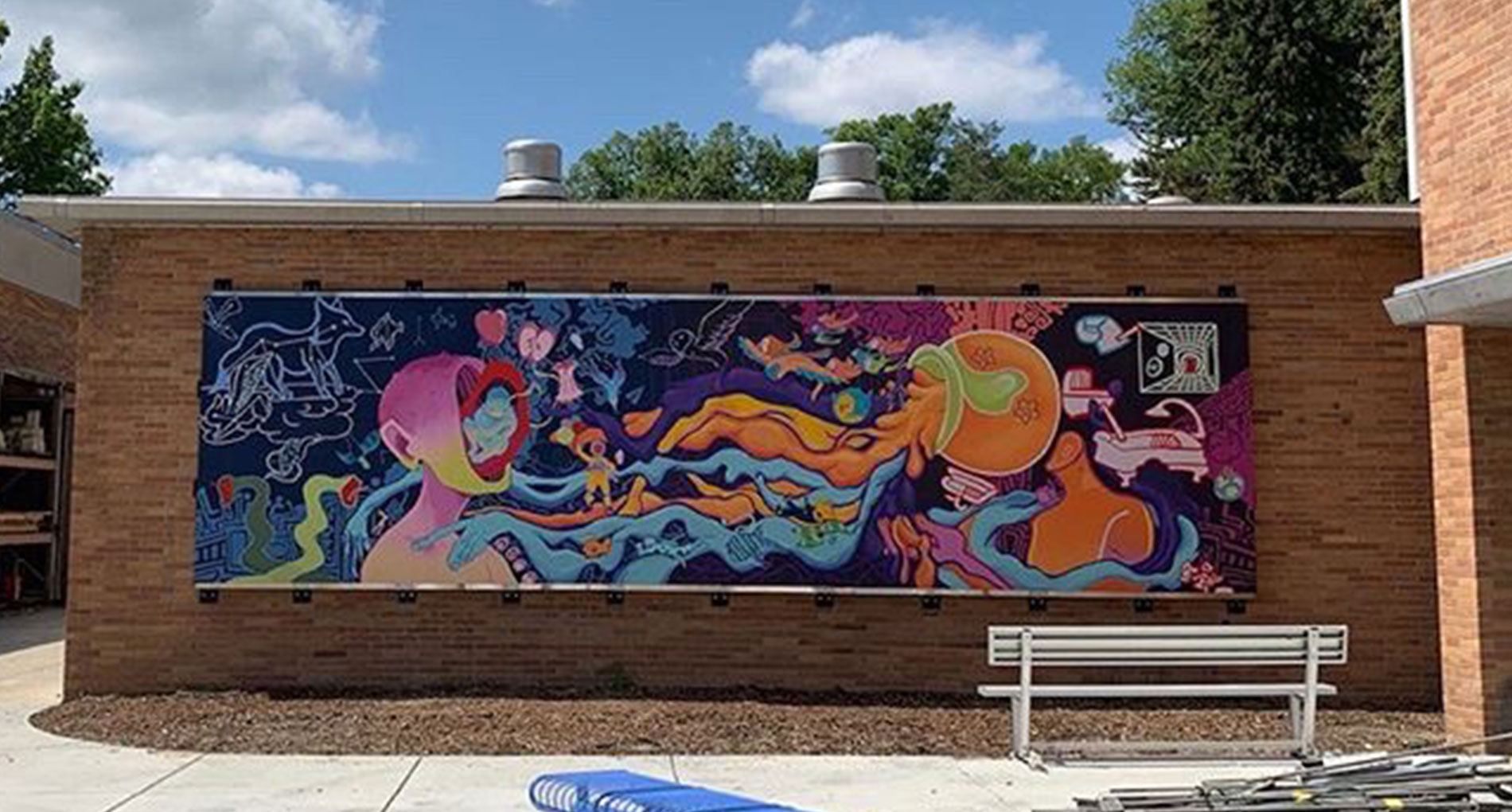 There is a new outdoor mural on MSU’s campus and it is breathing artistic life into the south side of Kresge Art Center, which faces the Red Cedar River. A reception will be held on Friday, September 13,  from 4 to 6 p.m. to officially unveil the mural. The public is invited.

The mural, which is titled Emergence, is the work of students in the “Public Art, Understanding, and Practice” course taught by Department of Art, Art History, and Design (AAHD) Associate Professor Ben Duke this past summer.

Students in the class came up with the design and did all the work involved to create the colorful mural after being inspired by a weeklong study-away trip to New York City where they studied public artwork.

“This experience gives students a can-do spirit and the confidence to know that working in a team really extends their ability to accomplish something much greater than something they could accomplish on their own, which is an important lesson to learn,” Duke said.

During the trip to New York, the students visited various galleries including The Bushwick Collective in Brooklyn, which includes five city blocks that have been transformed into an open mural gallery. They also visited Colossal Media, an outdoor advertising company, and learned about the company’s process for creating building-sized painted advertisements.

Spending the week together in New York gathering inspiration from public art exhibits and exchanging ideas was especially helpful in laying the foundation for a collaborative, comfortable environment in which to create the Kresge Art Center mural.

“Going to New York together for that period of time really helped us all get close and be able to work together better,” said junior Marketing major Kathryn Resseguie. “This made collaborating on the mural more comfortable because it’s not just someone you don’t know giving you constructive criticism on your work.”

This experience gives students a can-do spirit and the confidence to know that working in a team really extends their ability to accomplish something much greater than something they could accomplish on their own, which is an important lesson to learn.

Once the students returned to Michigan, they began to design the Kresge mural by creating individual collages and narrowing down which elements of their work were most eye-catching. They then created a cohesive draft of the mural that included elements from each student’s individual collage.

With funding from Art on Campus and a conceptualized draft of the project, the class began the monthlong process of creating the mural.

This large-scale group project taught students valuable lessons about teamwork, collaboration, and compromise to carry into their future practices.

The goal of the Public Art, Understanding, and Practice course is to teach students about audience engagement and to help them gain experience with the artwork production process from inspiration to project completion.

“We definitely had to think about how the public would view our mural before we started it, which is why we used so many vibrant colors,” said junior Communication major Taylar Coyer. “Unifying everything in this mural with a similar theme of color was really important in creating the mural so it was cohesive, so the way everything is placed looks intentional.”

This is not the first time one of Duke’s classes has created a public outdoor mural. In 2017, students in his “The Public Art: Understanding and Practice” class created the A Colorful Melange: We All Belong Here mural that is displayed in the Grove Street Alley in downtown East Lansing.

Graphic Design Graduate Is a Business Owner and ADDY Award-Winner