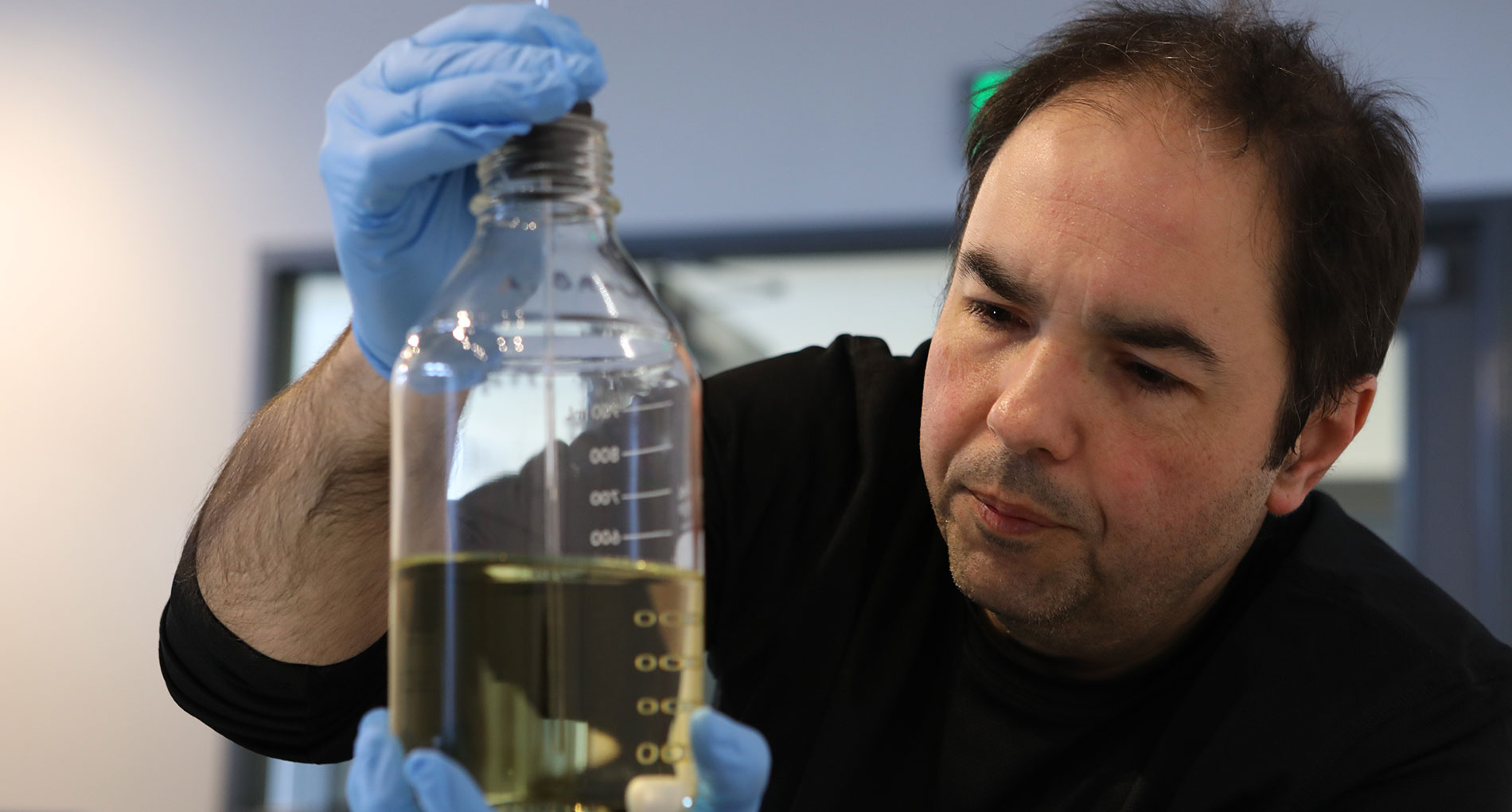 A recent research project by Adam Brown, Associate Professor in the Department of Art, Art History, and Design, received an honorable mention in the 2019 Prix Ars Electronica and this award-winning work, [Ir]reverent: Miracles on Demand, was featured in the largest exhibition of electronic art in the world, the Ars Electronica Festival in Linz, Austria. This is the third award Brown has received at Ars Electronica.

“Only a handful of awards are given where judges receive more than 3,200 entries from 82 countries,” Brown said. “The making of [ir]reverent: Miracles on Demand required more than three years of research and labor. I am very grateful to have my work recognized among the top media artists in the world.”

[Ir]revent: Miracles on Demand is an artwork that examines the impact of invisible microbial agents on human history and its belief systems. This work was inspired by the numerous accounts of the “miracle” of blood appearing on bread, which humans have historically used to justify various actions and beliefs from conquest to divine agency.

“Many micobiologists agree that it is likely that the appearance of blood, at least in part, is due to serratia marcescens, a microorganism that, under the right conditions, can grow on bread and produces a red fluid that has an uncanny resemblance to blood,” Brown said.  ​​

For [Ir]revent: Miracles on Demand, Brown developed a “miracle on demand” by using serratia marcescens to explore the interconnected relationship human beings have with non-human species. The work features a Roman Catholic monstrance-inspired incubator, a sacred vessel used to display eucharist bread after it is blessed by a priest. A piece of holy bread is placed in the oculous, which is a small window in the monstrance, and micro droplets of serratia marcescens are delivered to the host. Over the course of two days, the blood-like substance appears on the inoculated host, thus producing a blood miracle on demand similar to those seen centuries ago and even today.

“Countless historical accounts of blood flowing from bread were recorded during the classical period of antiquity, the middle ages as well as modern times,” Brown said. “Blood miracles were used as a complex anthropogenic currency to justify everything from corrupt human conquests and evidence of divine agency, to anti-Semitic persecution.”

An example of this occurred in 322 BCE when a Macedonian soldier under the leadership of Alexander the Great broke bread outside the city of Tyre and drops of blood trickled out from its center. Alexander used this as a sign from the Gods prophesizing the destruction of Tyre and proceeded to conquer the city.

Brown and his team tested various strains of serratia marcescens and growth media to recreate Alexander the Great’s bleeding bread. They learned how to make communion hosts at the Monastery of Saint Clare in Pennsylvania and tested the ability of serratia to grow on this bread. [Ir]revent: Miracles on Demand is the outcome of these experiments.

“So what happens when one explains an apparent miracle in terms of natural causes,” Brown said. “What if one replaces God with a lowly bacterium. Is man’s exceptional place in nature undermined? Or is the bacterium elevated to exceptional status as an agent of God’s intent? [Ir]revent: Miracles on Demand raises these questions by approving that microbes can perform miracles too, challenging our understanding of historical events, the belief system of organized religion, and the concept of the supernatural.”

Brown currently is negotiating with other international venues to exhibit this work.

Brown is an internationally recognized artist, scholar, and educator whose work incorporates art and science hybrids including living and biological systems. He has exhibited in other international venues including Kapelica Gallery in Ljubljana, Slovenia; ZKM, Center for Art and Media, Karlsruhe, Germany; Synth-ethic, Vienna, Austria; ZeroOne, San Francisco, California; and Brazilian Biennial Emoção Art.ficial 5.0, Sao Paulo, Brazil. His work has been written about widely in publications such as The New York Times, Wired, Nature, Sculpture Magazine, The Washington Post, Forbes, PNAS, and Discover. Brown currently is an Associate Professor at Michigan State University where he directs the BRIDGE Artist in Residency.

Ars Electronica is a festival where art, technology, and society meet. A showcase for creativity and innovation, Ars Electronica is one of the world’s largest media art venues and digital music festivals. This year’s festival was held over five days in September at 16 locations in Linz, Austria, with 501 exhibits featuring the work of 1,449 artists and scientists from 45 different countries.