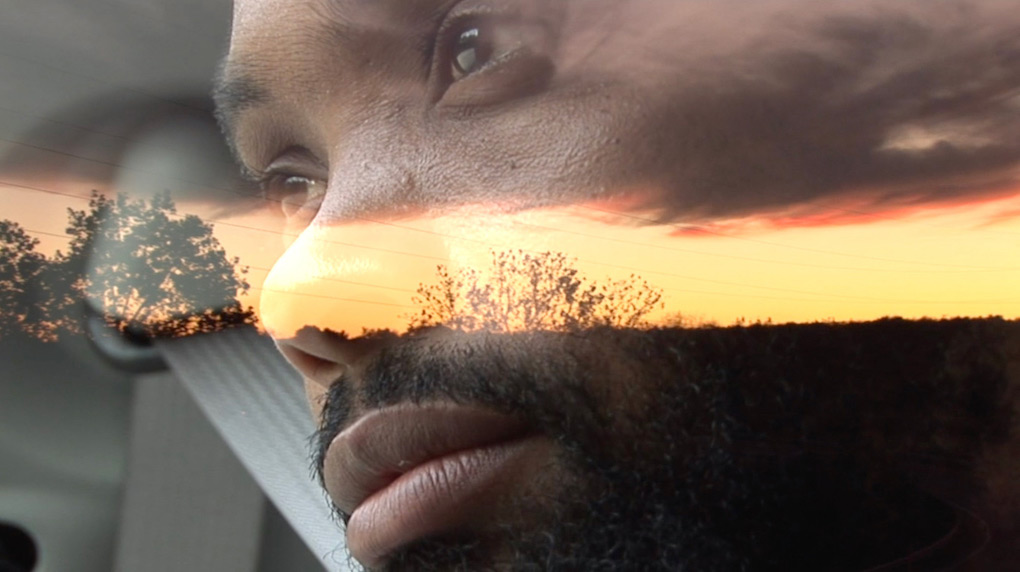 (PLEASE NOTE: In response to the novel coronavirus (COVID-19) outbreak and in the interest of public safety, the Eli and Edythe Broad Art Museum closed on March 14 and has not determined a reopening date due to the rapidly changing nature of the situation, but will communicate updates as they become available. Also, the Claudia Rankine Signature Lecture scheduled for April 9 has been canceled, and the Capital City Film Festival, in which the John Lucas film, The Cooler Bandits, was set to be screened, has been postponed. Select films will be screened this summer as part of that festival.)

The John Lucas and Claudia Rankine: Situations exhibition now on display at the Eli and Edythe Broad Art Museum at Michigan State University has generated several campus and community events involving its creators – documentary filmmaker John Lucas and National Book Critics Circle award-winning poet and Macarthur genius Claudia Rankine – including a signature lecture by Rankine, film screening by Lucas, literary and video contest with $3,500 in prizes, community readings groups, and the teaching of Rankine and Lucas’ work in undergraduate and graduate seminars.

Lucas and Rankine began producing Situations in 2008 following the election of former President Barack Obama. The videos address the complexities of living in a so-called post-racial United States by foregrounding the public and private experiences of Black Americans. They combine still and moving images from archival, televised, and surveilled sources with voice-overs by Rankine to address both explicit acts of racism and insidious racist aggressions that are built into institutional structures and everyday life.

The videos exist around public experiences in individual lives. These experiences turn into situations that resonate with us not only as people, but as citizens.

“These are multi-genre responses to contemporary America,” Lucas and Rankine said. “The videos exist around public experiences in individual lives. These experiences turn into situations that resonate with us not only as people, but as citizens.”

Situations emerges from Rankine’s 2014 hybrid prose-poetry book Citizen: An American Lyric, which likewise highlights the micro and macro racist aggressions that occur daily throughout the social and political fabric of the United States.

The critical and popular acclaim earned by Citizen enabled Rankine to found The Racial Imaginary Institute, an organization “committed to the activation of interdisciplinary work and a democratized exploration of race in our lives.”

Part of the Curriculum

All or parts of Rankine’s book currently are being taught in at least 19 different classes at Michigan State University.

Joshua Lam, Assistant Professor in the Department of English, is teaching Citizen in two different English courses. One is an introductory course (ENG 280) on the Foundations of Literary Studies.

“I’ve used the book as a testing site for exploring literary theories of authorship, authorial identity, reader-response criticism, and intertextuality,” Lam said. “I’ve used it to foreground the social and political stakes of these issues by centering representations of marginalized experiences in discussions of theory and methodology. “

Lam also is teaching Citizen in a course on literary non-fiction in the United States (ENG 323). Students in that class are first studying documentary prose and poetry from the 1930s and 40s. They then will compare those works with the hybrid methods of Citizen and the Situations videos. In addition to studying formal methods of composition, the students also will compare how discussions of racial difference and economic inequality are conducted in these two very different eras.

Copies of Citizen: An American Lyric are being circulated in the community and are available for purchase at the MSU Broad Museum store.

Who Is a Citizen Contest

Rankine’s book is the inspiration for the Who Is a Citizen? contest sponsored by the Creative Writing and Film Studies programs within the Department of English. This literary and video contest will award seven $500 prizes and is open to all current MSU students, regardless of program or level.

Contest participants must submit short prose, poetry, screenwriting, or video works that respond to the question, “Who Is a Citizen?” The works submitted may explore racial differences and prejudice, nationhood and personhood, interpersonal and systemic racialized violence, marginalized identities and experiences, migration and conflicted borders, or historical trauma and other themes relevant to evolving notions of citizenship.

Six prizes of $500 each will be awarded by a panel of Michigan State University faculty with one $500 prize determined by a community vote. The winning entries also will be featured at the Broad Art Museum.

The deadline for submissions is Friday, February 28. For more information on the contest and how to enter, see the “Who Is a Citizen” contest website.

(PLEASE NOTE: Due to the novel coronavirus outbreak and in the interest of public safety, The Claudia Rankine Signature Lecture that was scheduled for April 9 has been canceled.)

Rankine, who is the Frederick Iseman Professor of Poetry at Yale University, will speak with the greater MSU community at the Erickson Hall Kiva on Thursday, April 9, as part of the College of Arts & Letters Signature Lecture Series. Doors will open at 6 p.m. with the lecture starting at 7 p.m.

In addition to Citizen: An American Lyric, Rankine also is the acclaimed author of four other collections of poetry: Don’t Let Me Be Lonely: An American Lyric, PLOT, The End of the Alphabet, and Nothing in Nature is Private, which received the Cleveland State Poetry Prize. Other notable honors include the Academy Fellowship for Distinguished Poetic Achievement by the Academy of American Poets in 2005, the Jackson Poetry Prize in 2014, and a MacArthur “Genius Grant” in 2016.

Originally founded as the Celebrity Lecture Series in 1998 by the College of Arts & Letters and the Dean’s Community Council, the series was later renamed the Signature Lecture Series in 2007 and allows notable public figures to interact and engage with the faculty, students, and greater community of Michigan State University through conversations and discussions.

Support for this series has come from sponsors both within the University community and the community at large. Their generosity has been critical in attracting the best and most qualified individuals to conduct an informed and wide-ranging discussion of contemporary ideas and creative achievements in the arts and humanities.

The popularity of this series has attracted some of the most illustrious scholars, critics, novelists, poets, film producers, and creative artists of our time, including Soledad O’Brien, Ken Burns, Oliver Stone, Richard Ford, Maya Angelou, and Trevor Noah, just to name a few.

(PLEASE NOTE: The Capital City Film Festival, in which the John Lucas film, The Cooler Bandits, was set to be screened, has been postponed. Select films will be screened this summer as a part of that festival.)

Lucas also will return to MSU’s campus in April for the screening of his documentary, The Cooler Bandits, on Friday, April 10, as part of the Capital City Film Festival. This special film screening will be followed by a discussion with Lucas and the people featured in the film.

Lucas has worked as a documentary photographer for more than 25 years and has directed and produced several cutting-edge multimedia projects, including collaborative works with Rankine.

In 2014, he completed The Cooler Bandits, his first feature-length documentary film, which follows four friends who struggle to confront their future after 20 years in prison. As teenagers, the friends engaged in a series of robberies, not understanding the serious consequences of their actions. Although no one was physically injured in these robberies, they received stiff prison sentences of up to 500 years.

From 2006-2013, The Cooler Bandits followed the journey of these four friends. Lending voice to personal experiences of incarceration, the film encourages viewers to grapple with the inequities of our criminal justice system and humanizes the staggering statistic of Black men branded “felon” for life.

The film was awarded best documentary at the 2014 Harlem International Film Festival.