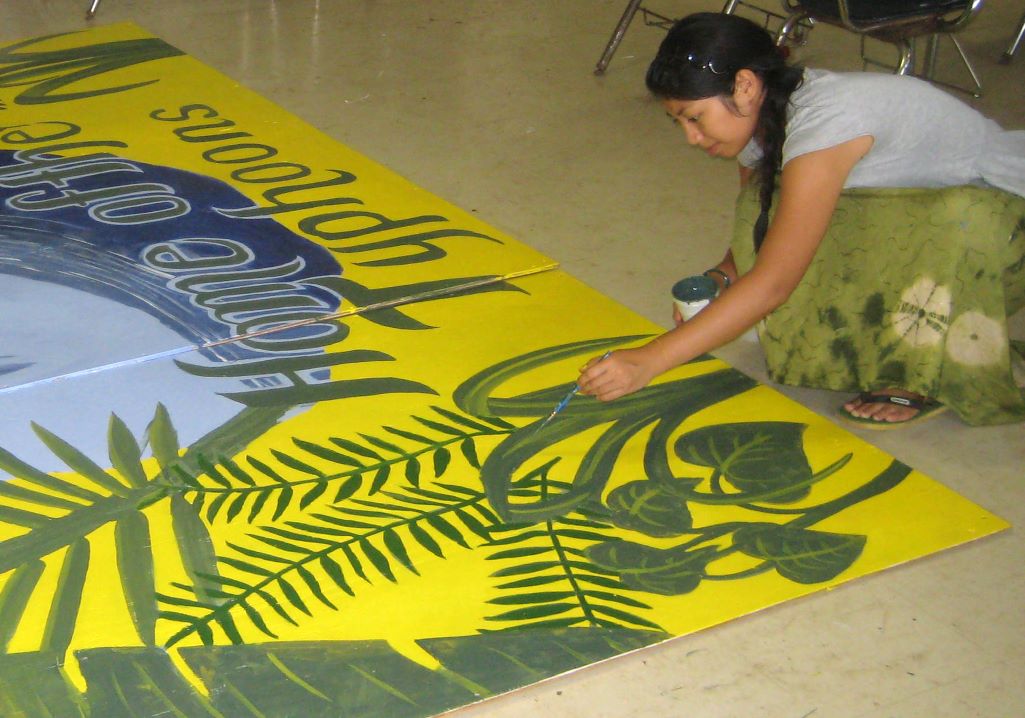 Founded in 2019, this scholarship, which annually awards up to $1,000, supports emerging artists studying the visual arts or artists seeking to establish a professional presence or enhance an emerging presence. Preference is given to artists with a vision for, or an emphasis on, enhancing awareness and equity across race, gender, sexual orientation, gender identity, or ethnicity.

“I feel incredibly lucky to be awarded this scholarship,” Gupit said. “When I learned about this award, I was amazed that it exists to support emerging artists like me whose research focuses on identity issues.”

Art that Focuses on Identity Issues

Gupit submitted five works for the scholarship competition. Two of those pieces, A Learner’s Space and Tracings, were accepted by jurors to be included in the Michigan Collegiate Art Exhibition, which is a juried, competitive exhibition that showcases the work from undergraduate and graduate students from all around the state at the Lansing Art Gallery & Education Center.

A Learner’s Space reflects on the gap created through the passage of time between Gupit’s current self and her time in school from 1st through 12th grade. The piece, which Gupit created using blackboard paint, chalk, fabric, and an angle iron, is meant to show the degradation of memory over time.

“I used chalk and a chalkboard eraser to create marks that seem to disappear behind the hanging scrim,” Gupit said. “The transitory quality of the scrim alludes to the inconsistencies between one’s recollection and a lived experience.”

Tracings, on the other hand, was an attempt to complicate the socioeconomic disparity Gupit saw in the Los Angeles Unified School District institutions that she attended in her youth. She used chalk, correction tape, and a projected image to create this piece. Both hole and fragmented pieces of chalk were used to signify the quality of education in each ZIP code of inner-city L.A, with each color representing a specific ethnicity within the city.

“My aim in making this work was to spread awareness to racial and socioeconomic inequalities in inner-city L.A. as well as those experienced around the world at local and global levels,” Gupit said.

Gupit’s work is influenced by her background and her experiences growing up. In 1998, Gupit and her family moved from the Philippines to Los Angeles to a one-bedroom apartment. Through these circumstances, she became very aware of the uneven distribution of wealth among the people and communities of Los Angeles.

“The scholarship means a great deal to me in that research into marginalized communities is being recognized,” Gupit said. “I am hoping that this opportunity will facilitate other possibilities to show my work in and around Michigan and branch out to show in other states too.”

In the past, Gupit mainly created drawings working on her apartment desk. Now, as a graduate student at MSU, Gupit benefits from having adequate space to not only create larger 3D works but also to evolve her research into materials that widen the range of possibilities of her research.

“The way the MFA program at MSU is designed allows me to work on my research at a consistent pace, which is important for the kind of work I create,” Gupit said. “Having the opportunity to conduct studio visits with faculty within and outside the department has also helped push my ideas.”

Gupit received her BA in Studio Art at Williams College. She also studied in Rome, Italy, through a program with Tyler School of Art and Cornell University. She has had her artwork displayed in more than 15 exhibits around the world from California, Massachusetts, New York, and Michigan to Taiwan, South Korea, and Italy.

The way the MFA program at MSU is designed allows me to work on my research at a consistent pace, which is important for the kind of work I create.

Gupit currently is teaching Drawing I at Michigan State University as an Instructor of Record. From 2014 to 2019, she was a K-12 English Teacher in Taiwan, South Korea, and Micronesia.

Besides the Elizabeth Charles Emerging Artist Scholarship, Gupit also received the 2019 Academic Achievement Graduate Assistantship Fellowship at MSU. In 2013, she was awarded both a Prize for Distinction in Art at Williams College in Massachusetts and an Art Fellowship Award at the Berkshire Art Association also in Massachusetts.

Gupit plans to graduate in May 2022 and wants to build on her practice and have her own studio. She would like to explore residencies abroad and work alongside other artists who also are attempting to give a voice to underrepresented groups.