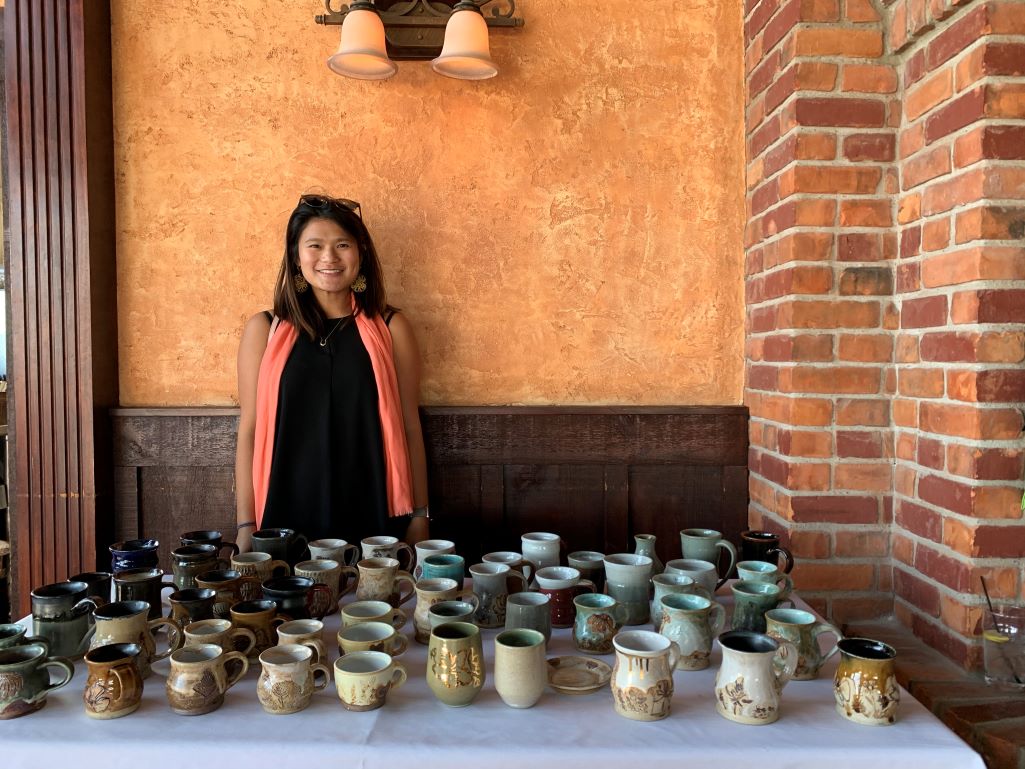 The day after May McCalmon’s art pieces were mounted at Kresge Art Center as part of the Undergraduate Juried Exhibition, they had to be taken down due to the COVID-19 outbreak that prompted the suspension of all face-to-face instruction at MSU.

“I was pretty excited and not too stressed about it,” McCalmon said about the exhibition. “I was ready and had been working towards it for almost three years. I definitely still feel accomplished for it, but it will never be the same as it would have been.”

McCalmon, who graduated this month with a double major in Studio Art and Art Education, created 15 pieces, a mix of paintings and ceramics, for the exhibition. Her work is based on the ideas of memory and home. Her mom passed away when she was in high school, which has impacted her art and why she makes a lot of art about her childhood and her home.

“Right now, that is something that has a major influence on me,” she said.

For her piece, Home, McCalmon describes the ceramic work as sculptural. She rolled a slab of clay, then formed a cylindrical form and carved images onto the piece, which was soda fired, a process in a gas kiln where soda vapor is sprayed into the kiln to give it a special effect that darkens the clay.

“There’s no glaze on this piece, only stain that I put into the lines I carved on the piece,” McCalmon said. “The images on this piece are the house I grew up in from the front and backside. On the inside, which I don’t have pictured, there are elements of the staircase railing from my house as well.”

McCalmon’s painting, Water, made from oil paint on a 36 x 48” canvas, also was inspired by childhood memories.

“I’ve had a lot of good memories with family at the beach or at the lake, my aunt and uncle live on Lake Huron,” McCalmon said. “I chose to paint this because I had these images that I saw connections between, so I wanted to portray that through a single composition.”

Every year there is an undergraduate show at SCENE Metrospace and for the past three years McCalmon’s work has been featured in that show. This year, her two pieces, Home and Ranch, were accepted. She also had some of her ceramic mugs displayed at the Michigan Mud Show at Oakland Community College.

When McCalmon first came to MSU, she was enrolled in James Madison for two years. She then went on a study abroad to the United Kingdom for environmental policy for a month during the summer of 2017, which led her to change her major to Studio Art.

You can make connections from other subjects to art, and that is definitely something I want to take when I become a teacher. We are not just painting landscapes; we should be thinking about what is going on in the world around you.

“The professor [from the study abroad in the UK] said what you do in your free time should be what you do,” McCalmon said. “I don’t read articles in economic policy in my free time, but I still draw or sketch.”

This past summer, McCalmon went on a study abroad to Italy where she focused on drawing and painting.

“You can make connections from other subjects to art, and that is definitely something I want to take when I become a teacher,” McCalmon said. “We are not just painting landscapes; we should be thinking about what is going on in the world around you.”

During her time at MSU, McCalmon worked at the Broad Art Museum in the education department. She also worked in the Kresge Art Center and was the President of the Clay Club.

Now that she has graduated, she plans to apply to graduate schools for next fall so she can teach art at the university level. While she is applying to graduate school, she will be in Grand Rapids student teaching this upcoming year. For the first semester, she will be teaching primary grades and the second semester in secondary grades so she will be certified for K through 12. She will have classes at MSU on Fridays.  She will start observing her mentor teacher, then she will be taking on all of the classes as the teacher.  Then at the end of the semester, she will go back to observing to write papers and reflect on her time.